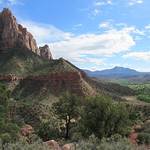 Picture, if you will, yourself walking through a forest.  What do you see?  This might differ a bit from person to person depending on the types of forest they're familiar with, but I can safely assume you've imagined a great number of trees.  Lots of different kinds of trees.  And maybe you can envision what the ground looks like, covered from horizon to horizon in smaller shrubs and herbs.  You can likely hear the calls of birds, a few you recognize and many you don't.  Not to mention all of the animals running around, hiding in canopies, and living their lives.

If this is what you're picturing, what you're piecing together in your mind is something close to a healthy ecosystem.  Lots of different life existing alongside one another, making the most of the time they all have.  This consideration for "lots of different" life has a name in ecology, and that name is biodiversity.  It's one of those things that can very easily be taken for granted, especially when humans have such a hard time identifying all of the different kinds of life out there.  It's easy for us to think that we can "just plant any tree here" without understanding what else is around that would either make its life harder, easier, or even possible at all.

Biodiversity is the gateway to understanding just how intricate a web our Earth systems are.  That we have such a palette of life, but it all manages to live alongside each other without becoming a detriment to itself and others.  So let's take a look at this key topic in ecology and find out just how important it is to how our planet functions.

The term biodiversity is originally derived from the words "biological diversity," considering the spread of variation in life on Earth.  These days when we use the word, we tend to use it to describe one of a handful of types of diversity on our planet moving on a micro to a macro scale.  The 3 major types considered are genetic, species, and ecosystem diversity, but as with all human categorization, nothing is truly limited to any known number of labeled buckets.
Finally, we have ecosystem diversity which is the variation of ecosystem on our planet, or really over any large chunk of the planet like a continent.  By having multiple types of ecosystems form, a greater quantity of species can take hold throughout the planet.  This also allows for ecotone communities to form which can fill very necessary ecosystem functions to move nutrients and resources from one ecosystem to another.

Let's say the insect pollinators in this hypothetical ecosystem vanish.  This has a few rippling effects.  Any animal that fed on the insect will no longer be able to do so.  If this was the only thing the animal ate, they will also die off.  If any plants that the insect pollinated cannot be pollinated by birds or the wind, that plant will also die off.  In turn, any animal that depended on that plant will die off, and anything dependent on the creatures dependent on the plant will follow in suit.  This is the fragility of communities lacking diversity.

​Without the multiple insect populations to fill that pollination function, the ecosystem cannot sustain itself.  If there were more than insects capable of filling this niche, there may be some slowdown in ecosystem output, but it's chances of surviving are there.  Perhaps what is killing the insect is a viral disease.  If the genetic diversity of the insect population is varied enough, the entire population may not be impacted to the point of extinction.

It should come as no surprise that humanity has made a significant impact on the Earth.  A solid number of the activities we do to make our lives easier have rippling effects like we described above.  We won't go over everything that factors into a decrease in biodiversity, but it is worth prefacing that the rate at which we are recording extinctions is greater than any other point in the era of humanity, and it doesn't show much in terms of slowing up without major action.

Overexploitation is when we take more from an ecosystem than we need.  Further, it generally implies that we're taking more from the ecosystem than can be recovered without intervention.  Before the agricultural and industrial booms, when humans needed to take only what they needed so we didn't proverbially "shoot ourselves in the foot" we had to understand what the Earth could reasonably restore over time and not overuse the land and sea so we could sustain ourselves into the future.  In our current times, since we generate a lot of our own products, we tend to see overexploitation of land as a way of "leveling up" that land for human use.  In reality, we stop the ecosystem from performing its inherent functions, replacing it with functions that only serve humanity in the short term.  Deforestation is an example of this, making land available for agricultural and commercial use, while destroying one of our planet's most powerful carbon sequestration and nutrient cycling systems.
The final point we'll cover here is climate change.  As the Earth's climate continues to morph, historic habitats conditions are changing.  Some ecosystems are experiencing much more or less rainfall, drowning or starving plants respectively.  The seasons around the world are shifting, causing pollinators to not align with flowering seasons.  Massive storms and critical weather events are becoming more frequent, each with the power to destroy not only our homes, but the homes of the species we share this planet with.  And as other factors weaken the Earth's biodiversity, each of these has a higher chance to maim an ecosystem by being the catalyst that drives keystone species to extinction.

A Broad Appeal of Diversity

So that last section was a bit of a downer.  I don't want to downplay how important biodiversity is and how the way our species treats the Earth is doubling down on these detriments.  The time is now to embrace this understanding and rally for significant change to how we interact with our home.

To instill a bit of hope, humans are (and always have been) inspired by nature.  The concept of diversity is really no different.  As our species has globalized, we have, by all counts of the word, become a monoculture.  However, we have also learned about the cultures of our fellow humans from all across our world.  While it never seems like enough, we do see a lot more mindfulness toward diversity of human culture and experience now than we have in the past.

As the world learns to embrace diversity of human thought and experience, as we invite more people to the table to rethink how we treat our home, I think we'll find effective ways to a brighter future.  By embracing the variety of life on our planet and seeing that there's benefit in working with others to ensure healthy ecosystems, whether Earth- or human-made, we can find better paths forward, and help mitigate the far-reaching effects of our past ignorance as an isolated species for so long.  In accepting diversity, we can help sustain it, both for our species and for our planet.
~ And, as always, don't forget to keep wondering ~
Sources:
www.worldwildlife.org/pages/what-is-biodiversity
https://www.amnh.org/research/center-for-biodiversity-conservation/what-is-biodiversity
https://en.wikipedia.org/wiki/Biodiversity
Proudly powered by Weebly