It's been a while since we touched on the Earth's biogeochemical cycles.  This time we're going to go over one that tends to be easily overlooked.  We're pretty familiar with water and to a degree we even deal with the carbon cycle as a major planetary concern.  This time, though, let's zone in on nitrogen.  This super abundant element is always right at our fingertips, but only a fraction of life's chemical makeup is nitrogen.  While it may make up a small part of us, it is absolutely essential to all living things.
Let's dive in! 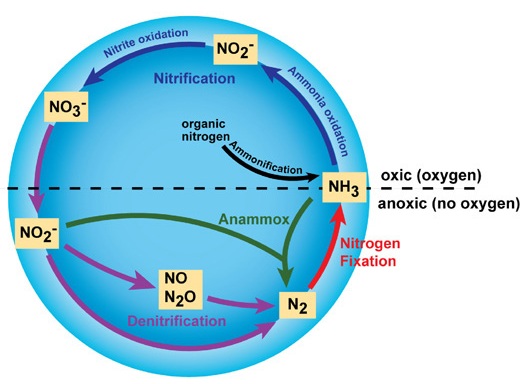 Why do we need nitrogen?

While it's true that nitrogen is all around us (it makes up roughly 78% of Earth's atmosphere), our atmospheric nitrogen is unusable by humans.  In fact, it's unusable by most life on Earth.  We do get nitrogen from the atmosphere, it just finds its way to us by way of, you guessed it, a biogeochemical cycle!
We should say, one of two things can happen from here.  The bacteria can further break down the ammonium into nitrates which it uses to power itself, and plants will take some of those nitrates to reduce to nitrite ions for their growth.  Alternatively, plants with ammonium-compatible root bacteria can break down the ammonium themselves.  In both of these cases, it's the nitrate form of nitrogen that plants finally work with to construct their amino and nucleic acids.​

And that's about it!  This may sound like a fairly closed loop, but it's also important to know how we, as humans, have come in contact with this cycle (because of course we do).  When humans discovered that nitrogen was key in plant growth, we naturally wanted to harness it to expedite that process.  What do we use to this day to help plants grow?  Oh right, fertilizer.​
And while we didn't get too much into how marine ecosystems interact with this cycle, they too use nitrogen from the atmosphere and break it down in similar ways.  When our fertilizers runoff into the ocean, they can result in ocean acidification.  One of the clearest examples of this is the oceanic dead zone at the mouth of the Mississippi River, which is the final destination for a ton of agricultural waste in the Midwestern United States.  The excessive amounts of nitrogen-rich fertilizer hitting the ocean created an algal bloom-induced hypoxia, or extremely oxygen-deprived marine environment.  Nothing is capable of living in this area.  Nothing.

While this is alarming, understanding how much the balance our planet impacts life on it is really important.  Little tilts in that balance can cause a ripple effect that we, and all life on Earth, have to deal with for generations.  Being able to recognize that we're consumers of these cycles is key.  We directly benefit from these environmental functions and seeing that can help us move forward in ways that let us keep being a part of this wonderful planet for eons to come.​
~ And, as always, don't forget to keep wondering ~
Sources
* Nitrogen Stats:
Cox, Arthur N., ed. (2000), Allen's Astrophysical Quantities (Fourth ed.), AIP Press, pp. 258–259, ISBN 0-387-98746-0