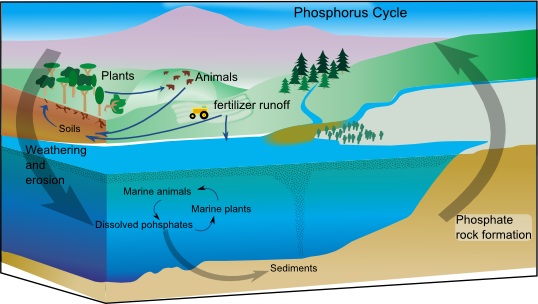 We're back once more to cover one of the Earth's biogeochemical cycles!  We've seen how water, oxygen, and carbon all move through our planet, and even covered one of the oft-overlooked cycles with nitrogen.  This time we'll be covering another lesser known element when it comes to life on Earth, and that's phosphorus.  Don't let not hearing much about this element fool you, though, as it's vital to both plants and animals and plays a few important roles in how life took shape on our planet.  Thankfully, while this cycle is a slow mover, it does what it needs to at its own pace and that serves us well!
Let's dive in!

Why is Phosphorus Important

Protecting cells is just one of phosphorus' more protective qualities.  Stepping further back on the cellular scale, it is also a component in bones and the exoskeletons of most insects, as well as the enamel on mammalian teeth.  The latter of those being the hardest biological material on the planet.  That puts your phosphorus-powered tooth enamel on a scale of hardness greater than steel!  This doesn't mean they're not breakable, hardness and brittleness are not mutually exclusive, but does explain why your teeth aren't scratched by metal cutlery while they can be chipped if you get hit in the face with a fast-moving ball.
Having looked at the other cycles, it probably comes as no surprise that us heterotrophs (organisms that can't harness the sun's energy directly) depend on getting this element from none other than our plant friends.  Plants will take up phosphorus from the soil and use it in photosynthesis, storing what it needs in ATP and glucose (sugar) molecules.

​Exploring the rest of the lithosphere is where we'll find most of the rest of phosphorus.  Among the geology of our planet is a rock rich in phosphorus called apatite.  While phosphorus, in general, is a rare mineral in our universe to the human eye, how it did find our planet also impacted some bodies around our planet too.  Rocks collected from NASA's Apollo program also contained traces of apatite!
As described a bit in the previous section, autotrophs like plants will take up phosphorus from the soil and in turn be consumed by the organisms that eat those plants.  Solid waste from these organisms, as well as their decaying remains, will eventually reintroduce phosphorus to the soil.  This is the most active part of the phosphorus cycle and can continue for centuries and millenia.

The hydrosphere is primarily responsible for moving this phosphorus in the Earth's topsoil over the land and eventually back to the ocean by way of runoff.  This process is very slow-going, but will eventually bring phosphorus back to the sea, working its way down to the sea floor where it will settle and rejoin the rock where its journey began.  Or, at least when you consider the sea floor rock formations as the beginning of the journey.  Fun thing about cycles is they have no real destination, just a constant state of presence.
If we recall our human impact section from the nitrogen cycle post, we do a pretty great job of shuttling excess fertilizer into streams that make their way into the ocean.  Turns out that how we treat phosphorus isn't where the similarities to nitrogen end either.  Phosphorus is also a eutrophication element.  Eutrophication occurs when a body of water experiences an overabundance of a nutrient that the ecosystem can use for rapid algal growth followed by an immense algal decay resulting in anoxic (oxygen-depleted) ecosystems.
These approaches have their limitations, but it's important that we continue to look into ways to combat our own actions' effects on our planet.  Understanding the downstream influence of our actions is the first step to figuring out how to solve the problem.  I'm sure it feels like I belabor the point of human interference with our planet's cycles, but it is abundantly important that we understand how we interact with and affect our home.  By spreading this knowledge, more people recognize that we're not just an observer of these systems, but an active participant.  Participants that can learn and change how we interact with our planet so we can live in such a way the ensures we have a home for millennia to come.
~ And, as always, don't forget to keep wondering ~
Sources
* Phosphorus Cycle and Stores:
https://en.wikipedia.org/wiki/Phosphorus_cycle​. Retrieved 2021-04-11.
https://en.wikipedia.org/wiki/Apatite​. Retrieved 2021-04-11.
* ATP and Cellular Energy:
https://www.youtube.com/watch?v=QImCld9YubE. Retrieved 2021-04-11.
* Human Phosphate Buffer System:
https://www.euroformhealthcare.biz/medical-physiology/phosphate-buffer-system.html. Retrieved 2021-04-11.
* Nitrogen and Phosphorus Eutrophication:
https://www.intechopen.com/books/monitoring-of-marine-pollution/nitrogen-and-phosphorus-eutrophication-in-marine-ecosystems. Retrieved 2021-04-11.
Proudly powered by Weebly