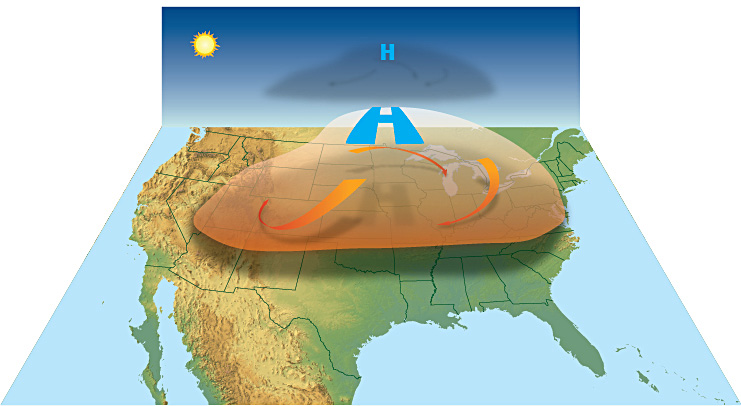 Extreme heat is a challenge for all species on the Earth.  We know that we're buying into a hotter planet now more than ever thanks to a greater breadth and depth of knowledge on how humans are impacting the global climate.  What's more, we understand that the story of a warmer planet is far more intricate than tracking a slow up-tick in degrees.  As the planet warms, how heat is distributed is changing.  And how this distribution changes impacts more than just the temperature, but how the Earth's systems behave.

Heat generally behaves like other fluid systems on the Earth.  Similar to water and air, heat is always trying to reach an equilibrium, moving from hotter regions to colder regions, from high pressure areas to low pressure areas.  When the systems this heat hitches a ride on start to change, it in turn has an effect on said heat.  In terms of extreme heat, we're looking at when these effects lead to higher than average temperatures.

One of those effects is what we'd like to cover here: the heat dome.  This year (2021), we've been hearing that our recent heat waves have been intensified thanks to these phenomena, so we wanted to take a look at what heat domes are and why they occur.  And we can start by taking a look a very recent example to boot, so let's dive in!

In late June to early July of 2021, the western edge of North America experienced a heat wave that set numerous record temperature highs in the northwestern Unites States and most of Canada from west to east.  Canada even experienced its highest temperature ever recorded for the country at 121.3 F (49.6 C), far higher than the average the region is known for.  So, where did all of this heat come from?

When these phenomena met, a heat dome was formed.
To help understand that, we don't need to look much farther than our own kitchens!  Or in lieu of having this appliance, having watched a cooking show at some point.  This same phenomenon is employed by one of humanity's own inventions: the convection oven!

In a standard conventional oven, the contents of the oven are cooked by simply being enveloped in heat being generated by the oven.  The heat moves around by gravitating toward cooler regions of the oven, usually by rising from where the heat is generated and subsequently falling when it rises enough to reach a cooler portion of the oven.  This works pretty well, but it isn't the most efficient way to put the heat to work.

One of the key takeaways from the recent heat dome is how much extreme heat impacts humanity.  Not just on a physical level, but in dimensions unique to our species on the human-dominated planet.

Where I'm from, around Chicago, IL in the United States, we experience a wide range of temperature fluctuation.  In a sense, this area of the midwestern United States is particularly well-equipped to handle relative extremes in both the hot and cold directions.  In my lifetime, I've experienced effective temperatures as low as -40 F (-40 C, and yes, this is the point at which Fahrenheit and Celsius reach parity) and as high as 110 F (43.3 C).  Residents here have felt the biting cold and the sweltering heat.

Phenomena like the heat dome, though, impact more than just areas familiar with extreme heat.  Hyperthermia, or heat stroke, isn't something everyone is used to being aware of, but is a very real health risk for humans.  Our bodies are equipped to handle some heat dissipation, but not at the level extreme heat thrusts upon us.  When our bodies fail to dissipate heat, we react in ways ranging from swelling to rashes to cramping to losing consciousness.  In the world of modern medicine extending our lives, being on medications that worsen our heat dissipation makes these risks even higher.  And our bodies have a certain "sweet-spot" for heat dissipation, too, making the elderly and young children much more susceptible to heat.  Being sick or overweight also reduces the body's ability to dissipate heat, further increasing risk of heat-related illness and death.  Further, the temperature compounds with the level of humidity in an area, or the level of moisture in the air.  Human bodies don't dissipate heat as well in high-moisture environments, effectively raising the temperature we feel as humans.  Take today for example, where my area has a high of 88 F (31.1 C) with a relative humidity of 70%, which compounds to an effective temperature of 100 F (37.7 C).  That base temperature is already one that the NOAA encourages caution in, but taking humidity into consideration makes it straddle between extreme caution and danger.  This is in September, well after the warmest, most humid times of the year for my area.
The main point here is that humans and extreme heat aren't particularly compatible.  In the world we fashioned for ourselves, it makes sense we never really planned for the things we're not really built to handle.  But extreme heat and phenomena like the heat dome are present concerns, ones we've bought into higher likelihoods of happening, and are now things we must be aware of.  We need to consider these dimensions of heat and humanity now more than ever before.

The reality of this is that humanity has already bought into making these kinds of phenomena more common.  The heat dome western North America experienced is recorded as a "1000 year event made 150 times more likely due to global climate change."  Moderate storms on the other side of the planet coupled with warmer surface temperatures on both land and sea are now triggers for events like these.  The silver lining here is that we know what they feel like now, we know they're happening more frequently and phenomena like heat waves, warming ocean temperature, and the jet stream can interact to form compounding events.  We can see where we need to invest in making the world humanity has built capable of withstanding these events.  We also know we're a driving cause in how these occur and know we can act now to mitigate the likelihood of these events for the generations that follow.  We just need to commit to that action and do it now.
~ And, as always, don't forget to keep wondering ~
Sources
2021 Western North America Heat Wave
https://en.wikipedia.org/wiki/2021_Western_North_America_heat_wave​