The ocean is a vastly mysterious thing to humanity.  It's a widely lauded factoid that we know more about space than we do about our marine ecosystems, the deep sea in particular.  This by no means shows humans don't want to know more about it.  Quite the contrary really.  The ocean just so happens to be one of the most hostile environments for us to explore and we struggle to create tools that can withstand the harshness of our planet's deepest regions.

What little we do know is quite interesting, so we're going to spend a bit of time delving into this beautifully treacherous marvel that is the marine biome.  We'll be taking a look at some of the more accessible ecosystems before going for the deep dive, so let's get started! 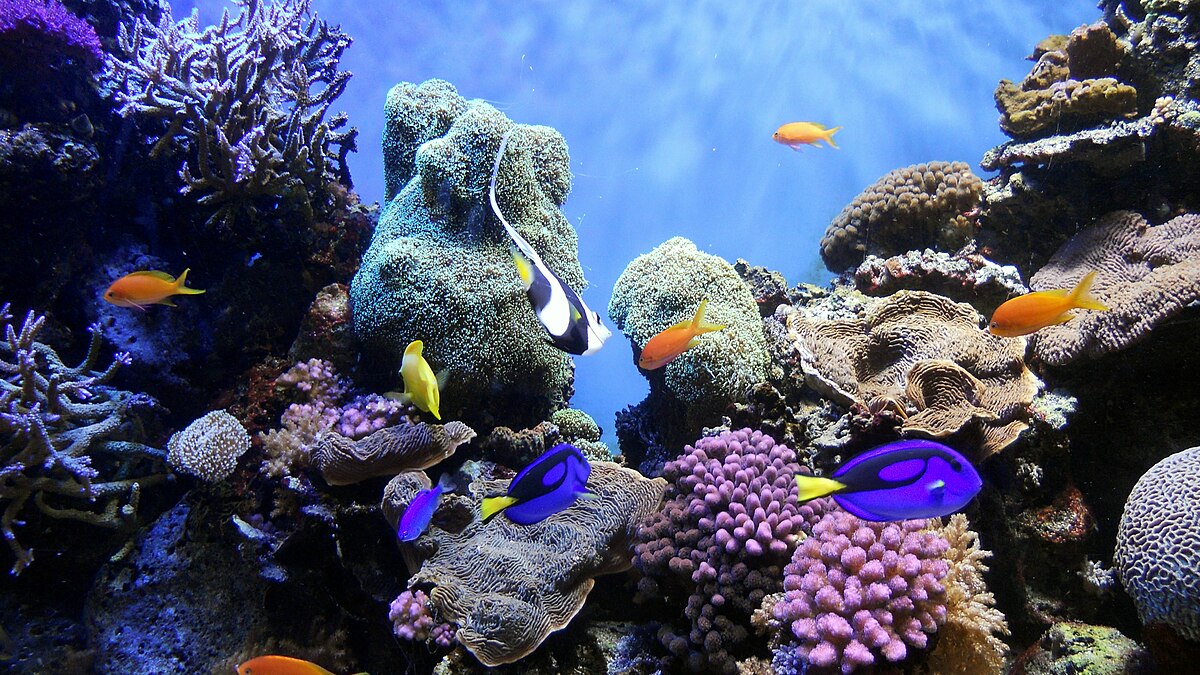 What is a Marine Ecosystem

Let's start at sea level, where humans are able to get a decent idea for how marine ecosystems thrive.  As discussed in our wetlands topic, water and land don't tend to stay completely apart from one another.  Where they intersect (and how they intersect) introduces us to an array of saline wetland ecosystems.  These areas are highly subject to tides in addition to how the continental shelf forms around them.  They may not exist all the time, or may at least vary in size throughout the year depending on tidal activity.  Regions that have this dependency are known an intertidal zones.

As we move a little further out from shoreline, but not so far out the seafloor isn't exposed to sunlight, we can find some pretty diverse ecosystems.  The kelp forest is essentially an underwater forest where kelp is a keystone species.  Being a keystone species, the communities that inhabit kelp forests depend highly on kelp for their energy and shelter needs.

Similarly, we have coral reef ecosystems where the keystone species is coral.  Coral is, despite its relative sedentary lifestyle, a part of the animal kingdom.  What we see as coral reefs are the result of many corals excreting calcium carbonate via polyps.  These stony skeletons form ecosystems for some of the most diverse communities across the world.  Coral reefs are extremely fragile systems, however, and are subject to even minor changes in water quality and behavior.
Up next is the mesopalegic zone, also known as the twilight zone.  Very little sunlight reaches the top of this depth, and creatures have adapted to this by having very wide eyes to take in as much of the minimal available sunlight as possible.  This region spans depths of around 200 to 1000 meters and is also home to what is known as the thermocline, or the range of depth where the ocean's temperature drastically changes, dropping around 20 C at the bottom of the region.  Any creatures trekking across this zone need to be capable of surviving both the drastic temperature shift as well as the pressure shift.

Below that is the bathypalegic zone, also deemed the midnight zone.  From this point downward, we are in complete and utter darkness.  Creatures here likely have no form of traditional light-based sight.  Most have also shed any skeleton or fragile organs.  That's because here, every 10 meters you descend, you introduce yourself to another atmosphere worth of pressure!  While the twilight zone housed predators that may swim up to the sunlit zone for meals, this level is almost completely dependent on detritus from the higher zones.  This falls in the form of what is called marine snow, since the organic remains that fall through the ocean tend to look like snowfall to those who see it.

Humans and the Sea

Keeping on the topic of the oceanic zones for a bit longer, humans long thought the deepest regions of the ocean to be barren.  Even in our modern era, we've rarely visited the depths of the ocean.  The only human-piloted excursion to the abyssopalegic zone was in 1960, where we had first-hand observations of life this deep within the Earth's waters.  We've had several unmanned vessels make the trek, but it is still a challenge to make it that far without succumbing to the unrelenting pressure.

Back up toward the surface, humans have a lucrative relationship with marine ecosystems.  Prior to air travel being a proven and eventually affordable mode of transportation, marine ecosystems provided the primary means of human movement across the globe.  That holds less true today, but we still depend on our waterways to transport goods across long distances.  For humanity's entire time on this planet, we've also used marine ecosystems as a source of food and materials, which does still hold true today.
In short, humanity's behavior on land, in addition to our surface-level interactions with marine ecosystems, has fairly substantial ripple effects on the entirety of the global marine footprint.  What we can learn from this is that where we were able to negatively impact oceans from land, we can have the reverse positive effect as well.  Helping our marine ecosystems can be done on multiple levels, by directly interfacing with the marine biome itself and by doing our best to enact greener policy and behavior on land.

Marine ecosystems are one of the Earth's remaining mysteries and humans should be doing everything we can to ensure they survive alongside us so we can, in turn, witness their beauty in the future.  And there is a bit of hope knowing that in doing our part treating the Earth better on land, the oceans will thank us too.
~ And, as always, don't forget to keep wondering ~
Sources
Ecosystem Types
https://www.thoughtco.com/types-of-marine-ecosystems-2291779​
Ocean Zones
https://oceanexplorer.noaa.gov/edu/curriculum/section5.pdf
Proudly powered by Weebly